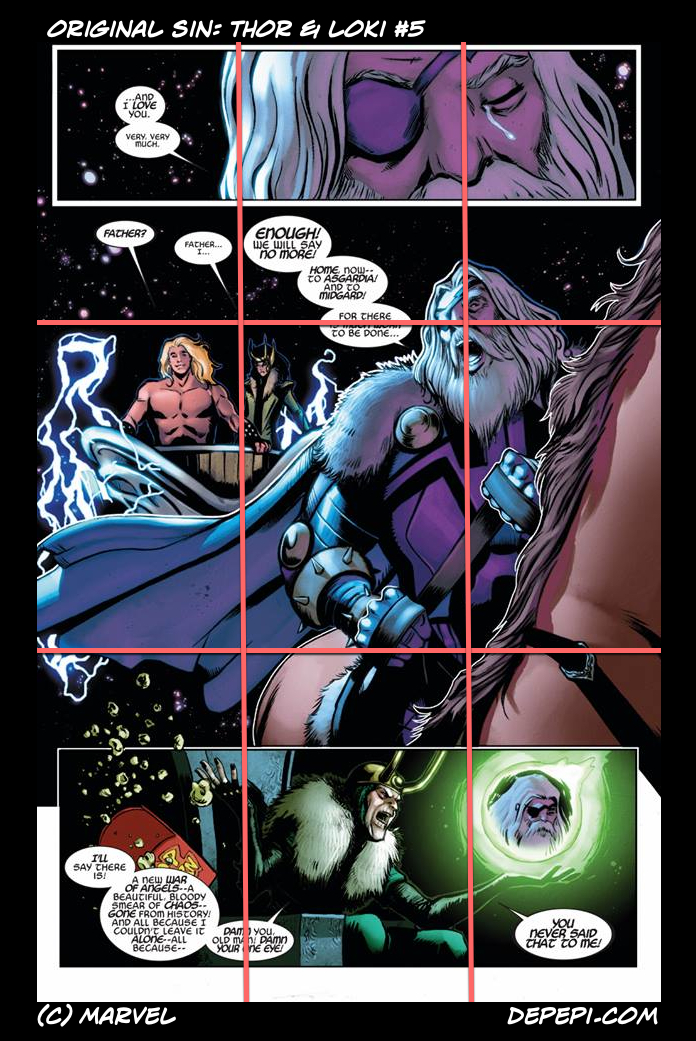 This is tough question: is Loki of Asgard really being loved by his adoptive father Odin? Or is Odin loving him in a very particular way? Is Odin following a cultural set of rules that their children might be challenging somehow? We’ll discover it thanks to a masterpiece. In Original Sin: Thor & Loki #5 we can find a page that speaks volumes about the relationship of father and sons, and a clash of generations and cultural values that are changing, specially related to gender.

It is a compelling page, which has lots of visual information. It gives us different points of view, several ways of interpretation, and some clues about the drama that encloses. If we divide the page in three columns and three tiers (rows) we’ll find out that the page conveys far more information than it seems to state. Let’s go first with the tiers, and then we’ll move to the columns. (Note: I have divided the page in equal columns and tiers, someone else would have left the tiers on the edges where characters appear, but I’ve decided to do it in equal parts, maintaining a traditional cut. You can, however, decide to divide this page in unequal tiers, where the first one is composed by Odin’s panel, the second by the scene in the center, and the third by Old Loki’s panel.) Stereotypes can be a good way to portray a fictional character in a comic, but they can also be negative in the real life. While stereotyping is a widely used technique in comics and movies to quickly introduce a character so that the audience can quickly grasp his/her personality, reality is that stereotypes in real life can end up with negative effects on a certain community.

There is a hidden stereotype in the Loki Meme above. According to it, when a woman says that she likes the Avengers, she is actually stating that she likes the villain (that’s Loki, hence, Tom Hiddleston). But this is a negative stereotyped vision of fangirls who like Tom Hiddleston portraying Loki. It assumes that girls cannot like the Avengers as men do. It also assumes that Loki’s fangirls are only so because of the celebrity and not because of other reasons like Marvel movies, or the comics. This stereotype is misleading and clearly misogynistic.

Have you ever encountered this test?

END_OF_DOCUMENT_TOKEN_TO_BE_REPLACED

Time ago I wrote an article arguing that Loki and Thor represented the Geek and the Jock in the movies. Recently Marvel Comics has confirmed that theory in a very direct and visual way. In Loki Agent of Asgard we can see Loki presented with geek traits:

END_OF_DOCUMENT_TOKEN_TO_BE_REPLACED And so we posted the *polemic pic* in our page in Facebook, and it happened: it started to get weird. Internet is such a weird place, really: you find all types of memes. And memes are a way to “consume democratized images”, that is: images of people who have been “objectivized”. In other words, images of people who have been transformed into a thing by the internet public.

The word meme comes from the Greek word “mimema” (μίμημα), which means “that which is imitated,” or just “to imitate”. This word originated from the hands of Richard Dawkins’ 1976 book The Selfish Gene. Meme was a word used to describe the spread of ideas and cultural phenomena in many areas.

We can think of a meme as a way that popular culture has to express itself. Memes carry cultural ideas, and are themselves, symbols that can be easily transmitted through the internet. Memes can contain writing, gestures, refer to rituals, or just imitations. Memes are elastic: they mutate, they change according to their public. In fact, memes are copied information, imitations, that we create. When we do so, we transform ourselves in “replicators,” “imitators,” or “replicants” (if you prefer Blade Runner).

In this light, the *polemic pic* is an example of popular culture, a meme. A famous German cosplayer called Fahrlight took a picture that was funny and awesome (very well done cosplay). It went viral on the web. Then, someone photoshoped Loki’s face on the body of the cosplayer. Some other people might even find adding some text to this second variation of the picture a *must*. (And you can go on like this forever.) The cosplayer “imitated” the real Loki, thus transmitting information, a selected information, which had varied (the image itself of a cosplayer, “a meme”). This information was then copied by others. It mutated on the way, and this copy was transmitted as well.

Pictures, once in the stream of the net, are potential targets to become “memes”. It does not only happen with screenshots from films, it also happens with any pic that is catalogued as “funny” by someone. You really don’t need to be famous to become a meme, nor be a cosplayer. What’s more: you don’t even need to be human to become a meme. Cats are purrfect for that. Plus, if an image is copied with variation and it’s selected, then you must have a designer appearing out of nowhere. You can’t stop it! (Susan Blackmore). Ta-da! The Internet Evolution is here! (Darwin applied to the memes!!)