Just posted chapter 50 of my Loki fanfiction, how did I get so far? I´m not even sure about 9 chapters ago I thought it was near the end and it just keeps going on and on …

Loki Fanfiction: No Good Deed Goes Unpunished. This is just some small extracts of chapter 50, things are getting kind of interesting.

END_OF_DOCUMENT_TOKEN_TO_BE_REPLACED

This story takes place after Thor the dark world and before avengers age of ultron. Tyra is a very special girl who knows the truth about people soon after meeting them. She meets Loki and knows who he is despite the fact he is disguised as Odin. She helps Loki to tell the truth and stop the disguise. She also helps him and Thor to become better brothers.
Thor – Rated: T – English – Fantasy/Sci-Fi – Chapters: 4 – Words: 4,733 – Reviews: 2 – Updated: 5/7/2015 – Published: 3/26/2015 – Loki, Thor

END_OF_DOCUMENT_TOKEN_TO_BE_REPLACED

Loki fan fiction: “no good deed goes unpunished,” by Fireangel76. Loki unexpectly finds something he neither looked for nor wanted and it gets in the way of who he is, and what he wants. Will he change his mind? Will he leave pain and destruction on his path? Or maybe he will find a space for a little hope?

“My name is Leah, although that´s not important, what´s important is the hunt, my price is an elusive asgardian prince named Loki. I´m freezing to the bones, this damn rain hasn´t stopped in hours, I heard a rumor he was going to come to this criminal´s bar tonight, but as usual I´m out o9f luck, no sign of Loki and I can´t feel my fingers anymore.”

A lonesome figure stands against a wall, waiting in the dark, she looks out of place; too pretty compared to the beggars that crawl around, too shabby for a hooker and way to naïve for a cop. Her long hair is soaked wet as the rest of her, some regulars tried to pick her up but her fierce full look once too close to her meant business and around this neighborhood you don´t mess with someone else’s business.

END_OF_DOCUMENT_TOKEN_TO_BE_REPLACED 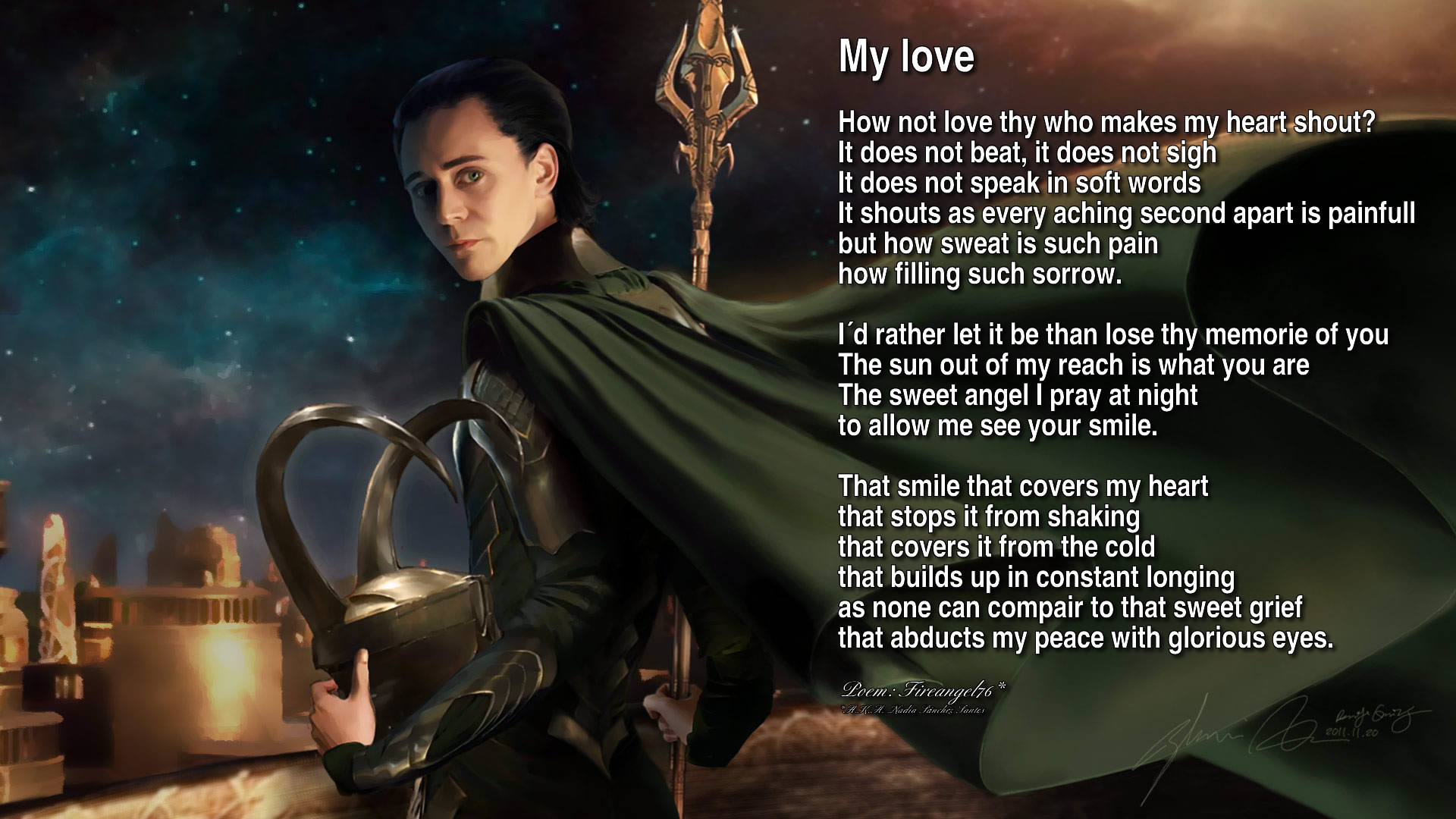 My Love, by FireAngel76 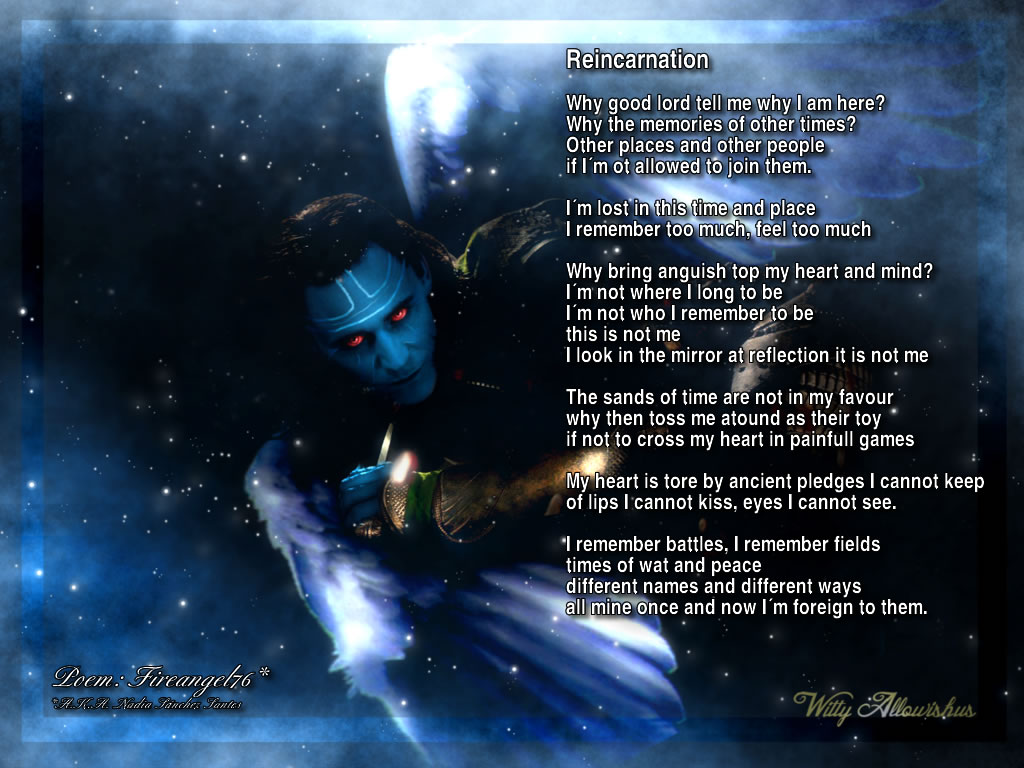 Loki´s Quest is the continuation of my loki fanfiction Redemption and Love and the third and last part of my Serie “Of all possible realities”, it takes places 16 years after the final chapter. The final confrontation between Loki and Thanos is inminent as Thanos has something in his power Loki wouldn t doubt to risk his life for. New and old allies help him as it becomes clear he will pursue his gold even without their help. He has lost too much, he wants his life back.

Loki´s heart was broken; his beautiful wife had died during the angels attack on Asgard. He had been away on Earth with the twins whom had just turned eighteen that year on a mission with the New Avengers team.

Diane had finally given them permission to join the Avengers´ missions as long as their father went along with them. Most of the original avengers had retired from action but they continued taking part of the team training their children who had become the new members. Steve and Natasha´s son Chris fought alongside of his father and had become very good friend of Eydl and Even. Clint´s daughter Helen was the new Hawkeye. Tony and Pepper´s son Antony Junior who was his father´s spitting image was bound into becoming the new Ironman much to Peppers dismay. Thor´s children Asmund, Ronald and Ingrid were still too young to join the team but they were eager to follow their cousin’s footsteps

END_OF_DOCUMENT_TOKEN_TO_BE_REPLACED

‘ “I miscalculated; I should be dead but I ́m still here. I ́ve condemned myself to the void, to the non-existence. I should’ve plunged Gungir into my heart
instead, at least that way the pain would be gone by now. I ́m sorry. I was desperate. I miscalculated.”
Regrets turmoil in his mind as Loki kept falling, sometimes he wished he could find his way back to Asgard to his family and beg for their forgiveness, other has killed him in combat.
There was no way to keep track of time or distance in the void, the silence, the darkness, Loki has no way of knowing how long has he been falling, he felt becoming numb as time passed by, memories of happier days haunted him as much as the events preceding his fall. Nightmares assaulted him even when condemned himself to a far worst punishment Odin could ́ve though for him. And he started to think he deserved it.
He cried for his mother until his voice failed him, he knew it was futile no one would be able to hear or see him, but that didn ́t stop the ache in his heart.
-Heimdall, please. I ́m here please, please see me.- he whispered as he shed his last tears. He was too weak, he hadn ́t eaten or drank anything for what least three weeks. He started drifting in and out of consciousness as his strength abandoned him.
In one of those rare lucid moments he felt a presence reaching out for him, desperately he pulled all of what was left of his magic and cling to it, anywhere void was his last thought before he lost consciousness.
      Sadly he miscalculated again. ‘

Redemption and Love, a Loki fan fiction by Fireangel76.

Summary: “My story is set just as Thor Dark World begins but even if much of the main events will remain the same I ll take a complete spin on Loki as Thor tries to discover who is the puppet master after the invasion and deals with the consequences. Will Loki be able to prove himself worthy and stay out of Thanos reach? Will he learn from mortals what he couldn t in Asgard? Find peace love?”

This is a part of chapter 2: “Thor couldn´t take his mind of what he had seen, the bruising could have happened during the battle, but the scars. Those awful scars wrapping Loki´s body, he knew they had to be from a flogging. The mere though send shivers through his spine.
Who could have done this? Who could´ve scared his brother so much that he rather keeps quiet?
He had reached the healers room, he needed to find Sygn. She was one of the best healers and a very trustworthy person. He needed her to treat Loki’s wounds without their parents finding out, not that Odin would care he was too angry at Loki to care, he was too proud to admit Loki´s actions hurt him because he still lived him. And Frigga, she would freak out if she knew, she´d even try to set him free, which wouldn´t be the best thing considering how powerful a mage Loki was and how scared he looked. No, Loki would be safer for the time being on his cell –where no harm can come- he had said to him. Thor suspected it meant no harm could come to Loki there.”

END_OF_DOCUMENT_TOKEN_TO_BE_REPLACED

My name is Castiel, or Cassie, or Cas for short.
I’ve been hiding from S.H.I.E.L.D. for almost a year now.
Why are you hiding from the best team in the world? I hear you cry.
It’s because I have the power to control the elements, and no-one in S.H.I.E.L.D. have my power.
Obviously: that’s why they want me.
But, it’s not just S.H.I.E.L.D. who want me, oh no. Loki, God of Mischief also wants me on his team, to defeat The Avengers, and take over Earth.

You see, when I was growing up, my mother left me, my dad and my brother Tate, because she was “scared of my powers”
I am glad she left when she could, because she was really starting to get on my nerves.
She would constantly book television interviews, magazine interviews for me talking about my power.

I am not the best looking. Brown eyes that are lifeless, brown hair cut into a pixie cut, and no matter how hard I tried: Spots.
I never had an interest in boys, or girls for that matter, when all my friends would be going out with their boyfriend or girlfriend every Friday night. It was an understatement to say I was lonely.

Cat: Well my family used to tell me they found me in a phone box but after that, I grew up in East Anglia (England) but I came to Edinburgh (Scotland) after spending 6 years in Spain.

C: Through the first Thor movie. I’ve been a fan of comics since I was a teenager but I never read Thor, I was more into Gambit from the X–Men, (I guess I like my men on the morally ambiguous side). I discovered Thor through the old Incredible Hulk TV series, which had a movie length special with Thor in. That series has very fond memories for me, it’s part of my childhood so despite not knowing much about Thor, I had to see the movie.

I liked how Loki wasn’t a two dimensional bad guy and I liked how Thor was a bit of an arrogant shit in the beginning. I intensely dislike the good/evil dichotomy where people are classed as either one or the other, because no one is all good or all evil, we’re a mixture of the two. Still, it wasn’t until I saw the additional scenes, where they rounded Loki’s character out so much and really made me understand him and where he was coming from, that I fell in love. I hope the release a director’s cut or something, with those scenes included in the film, I think it makes for a more rounded and better narrative.

END_OF_DOCUMENT_TOKEN_TO_BE_REPLACED Krystallazuli: That is an excellent question. My parents claim that I am an alien child, since I do not act like anyone else in the family. They say I am from the planet Venus, making me a Venetian Blind – I wore huge glasses until an alien encounter corrected my vision… or was it Loki? However, I do claim to have lived on the planet Earth for some time. I currently make my residence in a place called “Illinois”. Any additional information beyond this is considered TOP SECRET “classified”.

KH: How did you meet Loki?

KR: I met Loki quite a few years ago, reading some Norse mythology. He was just standing there, watching me read. Did not say a word for a while, then he sat down next to me, pointing out that the tale I was reading was all a lie, made up by Thor, trying to make him look bad. Was rather strange. When I went to see “Thor”, I was surprised to see him in a movie… looked exactly the same. They did a great job choosing an actor to play him… or was it an actor? It might just have been the real Loki. I’m not 100% sure it wasn’t the real Loki…