Recently we’ve had a little bit of a mess in our FB page regarding Loki’s sexuality. Some say that Loki is straight. Others state that Loki is bisexual. Others that he is pansexual, and many that he is polyamorous. Before starting to promote a label (or a set of them) more than another, let’s take a look to the definitions:

END_OF_DOCUMENT_TOKEN_TO_BE_REPLACED Though this might be viewed as a question of simple fashion, it seems that we’ve found something far more complicated. While Thor and Odin show up quite a symmetrical fashion on their costumes, Loki’s have a tendency to be more asymmetrical. The whole thing was discovered by someone in Tumblr who noticed that the sleeves of Loki’s shirt in Thor the Dark World in jail were different, and that the difference in pattern point at the “blue arm,” the one that makes him know that he is a Jotun.

If we take a closer look to Loki’s fashion, we’ll discover that he has more than one outfit in each of the films. In Thor he has symmetrical and asymmetrical garments. While his combat outfit and King outfit are symmetrical, his “casual” garments are asymmetrical and resemble what his normal outfit will be from the Avengers onwards. END_OF_DOCUMENT_TOKEN_TO_BE_REPLACED

There is one scene in the Avengers that gives me the creeps: the “bullying scene”. It is quite explicit itself: Hulk smashes Loki on the floor without mercy and without thinking about it too much. Could we take this scene as a metaphor for all the bullying that is going at schools and also later on in our lives into the workplace?

Under American eyes, Loki can be the representative of geeks in Asgard. If we consider Loki as a geek his actions to get noticed, to be one of the group, or to be accepted, are easily understood as a metaphor for those of a Midgardian kid who struggles at school for a place in the tiny, and yet quite cruel, schooling system. Since we tend to value physical characteristics more than intellectual ones, it is no wonder that you might have bullies who will take advantage of kids who have less muscle, but more brains.

Taken into this light, this scene could be seen as follows: Hulk representing the bully who has lots of animal instincts and few brains. Hulk is a scientist who turns into a huge guy who is driven by anger more than logic. And when this happens, he smashes things around. His opponent is Loki. Even though he might be a God, and even though he might be intellectually superior (or at least he thinks that), he has no physical match agains the Hulk. He simply does not have the muscle power.

This scene might be funny, but if we take a closer look it does recall a certain situation many kids might be facing at school: bullying. The bigger guy will get, by fear or by force, the money for food or even the food from the tinier guy. Maybe the tiny kid is more intelligent, but at the moment he has no power as to face “his Hulk”. Even if the tiny one cries out loud “enough”! It is possible that the big bully will find his way with force, or by using words that will definitely hurt, like “puny God.”

What do you think?

We’ll start analyzing a little bit the psychology of Loki. He is a very complex character, and he does look like he is crazy. However, he is more complex than that. What if he got that way just by his environment and just using his survival skills? What if he was too sensitive and the Asgardian environment was the soup to make him that way?

We’ll start with the first Thor movie where we can see Loki as a baby, kid, and youngster. Let’s take a look to the baby Loki. 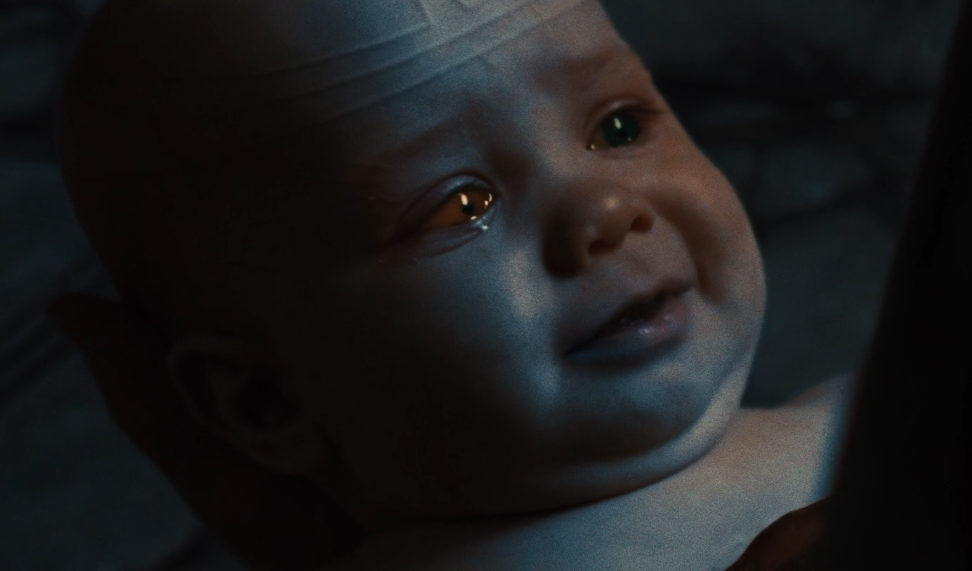 Loki was a tiny baby, for being a giant, and was left to freeze till death. However, Odin found him. The baby reacted to Odin, appealing, not to be thrown away. This “appeal” is inherent to all babies. They cry out in distress (and their cries make you mad, really, so mad that you have to do something to please them). Odin, brought the baby back to Asgard from Jotunheim, and decided to adopt it. So, him and his wife, Frigga, would be Loki’s new parents.